Despite worries over the end of the Chinese economic miracle and harder times because of the aftershocks of the 2008 financial crisis, global rebalancing is happening — and quickly.
by Philip S Golub 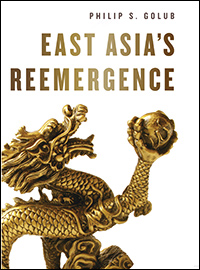 The International Monetary Fund’s executive board announced on 30 November that the Chinese currency, the renminbi (RMB) or yuan, would soon be included in the basket of currencies that make up its Special Drawing Rights (SDR), beside the US dollar, the euro, the British pound and the yen.

The decision recognised the growing role of the Chinese currency in international trade settlements. Since the launch in 2009 of a pilot programme for cross-border RMB trade settlements in Asia, the share of Chinese trade settled in RMB has risen from 3.2% to 25%, and should, according to the Financial Times, soon reach 46% (1). Offshore centres clearing the currency have been set up in Hong Kong, Singapore, Taiwan, London and Frankfurt. The RMB is still far from world reserve status, requiring full convertibility and complete capital market liberalisation, which China is not ready for and carries significant risks. But the RMB’s rise is a “momentous event in [...] international finance”, according to a former IMF economist (2) — the beginning of a slow shift towards a tripolar world monetary system no longer exclusively centred in the West.
“Great powers have great currencies,” says Robert Mundell (3). Like the gradual rise of the dollar to reserve status in the early 20th century, the internationalisation of the RMB is part of the larger story of China’s re-emergence as a semi-autonomous core of the world economy, and as the primary driver of the movement of East-West and North-South rebalancing that is a key feature of current world politics. China’s share of world GDP, in purchasing power parity (PPP), has risen in 40 years from less than 2% to over 16%, ahead of the US. Though Chinese economic growth declined with the “great recession” after the 2008 crisis, average per capita GDP (PPP) is now expected to increase within a few years (from $9,800 to $16,000, against $250 in 1980). Longer-range projections, which showed a growth trajectory similar to Japan in the late 20th century, suggest that per capita GDP will reach current Japanese or European levels by the mid-21st century. China is gradually regaining a position in the world economy in keeping with its demographic weight.

It has become the core of South-South trade and investment linkage, supplanted Japan and the US as the leading trade partner of nearly all East Asian countries, and become a crucial actor in South American, African and South Asian trade. China is now Brazil’s leading trade partner, ahead of the US. There are similar trends in Chile, Argentina and smaller South American economies. South Africa’s export share to China has risen from 1.8% in 1998 to over 12%, while imports have risen from 3% to 15%. Indian exports to China have risen from 2.9% to over 10%, and imports from 2% to 12%.

This points to a re-patterning of the geography of world trade, and an East Asia-centric South-South trading system, with China at the core. Thanks to new regional and transcontinental linkages centred in East Asia, South-South trade (SST) has expanded more rapidly over 20 years than global trade. In 2013 SST was 25% of world trade, 21% of manufacturing exports, and 25% of exports of manufactures with medium and high technological intensity. Trade between developed countries fell from 46% to less than 30%. The result is a reduction of traditional single-market dependency in Latin American, sub-Saharan and Southeast Asian countries on Europe and the US. This has been accompanied, particularly in East Asia, by industrial upgrading: the “developing” world’s share of manufacturing value-added has risen from 8.8% to nearly 30%, and of merchandise trade from 25% to 47%.
China’s re-emergence has begun to alter the vertical North-South relations of the age of western empire and industry. This generates new dependencies: when China sneezes, emerging country partners catch colds — as with the current downturns for exporters of primary goods because of China’s slowing growth. The impact of the global crisis on China evinces the need for a sustainable development strategy focused on domestic improvements rather than export growth. Even so, we are witnessing a structural change in the global economic and political hierarchy.

Politics has lagged behind economics, but a gradual reordering of world politics is visible in the growing voice of the South in organisations and clubs (G20), its activism in world politics, and new international institution-building efforts bypassing traditional centres of authority. Frustrated by the slow pace of change, notably in the IMF and World Bank, China has been leading the effort of global South countries to create a new system to govern the world economy. In 2013 Brazil, Russia, India, China and South Africa (the BRICS) set up the New Development Bank (NDB),headquartered in Shanghai, with a capital base (money paid in and pledged) of $100bn; this will combine investment and monetary functions, serving as a lending institution for infrastructure development projects as well as a reserve facility for balance of payments issues. In 2014 China founded the Asian Infrastructure Investment Bank (AIIB), which, like the NDB, has a $100bn capital base (the Japanese-led Asian Development Bank has $160bn, the World Bank $220bn).