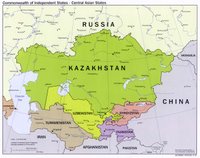 Robert Legvold, Columbia University
.
More than a decade after the fall, the great powers, including Russia, remain adrift when dealing with the immense space that was the Soviet Union. For much of this time, their confusion and indifference went largely unnoticed. If they miscast or obscured the challenges raised by the large floating chunks of a now defunct empire, the oversight seemed less blameworthy, given the remoteness, self-absorption, and weakness of so many of these unexpected new states. Then came September 11, 2001, and, in the mobilization that followed, these distant parts overnight became a key theater in the “twenty-first century’s first global war.” Central Asia, in particular, ceased to be a collection of forgettable “-stans,” and emerged as an integral piece in the war on Al Qaeda and the Taliban. In its wake the United States and other NATO members were suddenly a military presence in three of the five Central Asian states, and everyone, beginning with Moscow and Beijing, understood that the world had changed.

China, Japan, Europe, Russia, and the United States had from the start known that the post-Soviet space would be a more complicated— albeit less intimidating—affair than the Soviet Union, a single, united superpower...
.
Full-text available, click here.
.
Thinking Strategically: The Major Powers, Kazakhstan, and the Central Asian Nexus, Edited by Robert Legvold (For Russian version, click here)
.
Posted by Reflection Cafe at 12/15/2005