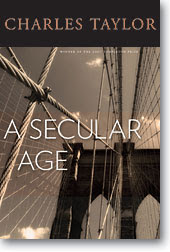 Charles Taylor, McGill University
Harvard Univ. Press 2007
Book Review By Economist, 9/6/2007
Human Society: A land where God is absent
.
IN MEDIEVAL Christendom it was almost impossible not to believe in a transcendent power that determined human destiny. In the modern West there are contexts where the absence of any such power is so deeply assumed that religious belief becomes almost impossible to articulate. When people from theistic cultures meet those who think in a “modern” way, it can be difficult for the two sides to communicate at all. Something even more impenetrable than a language barrier is at work.
The possibility of understanding reality without reference to God is often seen as one of the defining features of the modern era. It follows that an abiding theme of Western history is a weakening of religion's power, even in countries where people remain relatively pious. That, of course, is a huge over-simplification and Charles Taylor, a Canadian philosopher, has devoted more than 800 pages to picking it apart—without completely denying it. The Western world's gradual movement towards something he calls “secularity” is what gives shape and meaning to his book.
Objections to the view that secularism has been Western history's driving force come easily enough. By some measures, the power of religion (including its power to inspire fanaticism and hatred) is rising again in the early years of the 21st century. Moreover, there have been periods (including most of America's modern history) when the formal practice of religion has been on the increase.
Understandably, then, one of Mr Taylor's keenest concerns is to show that man has not progressed down a simple, linear path from one mode of consciousness to another. Modernity, he argues, implies a huge range of possible ways of thinking, including many variations of theism and atheism.
It is also significant that theocracy is not monolithic either. Societies can be brutally theocratic in either or both of two senses. Sometimes worldly rulers draw on religious symbolism to enforce their authority, impress their subjects or legitimise war. Alternatively, “pure” clerical power can use its prerogatives (over sacraments like baptism or marriage or absolution) to exercise authority over everybody else, including worldly rulers. Neither kind of theocratic power can guarantee that its subjects are deeply religious in their personal consciousness; indeed the opposite is very often the case.
Working through Mr Taylor's careful but idiosyncratic prose (a mixture of colloquialisms, technical jargon and terms that he has invented or redefined), one finds big nuggets of insight, useful to almost anybody with an interest in the progress of human society. His book is not exactly a history of secularism; he is a philosopher, not a historian. The account does have a chronological element, but it is more a vast ideological anatomy of possible ways of thinking about the gradual onset of secularism as experienced in fields ranging from art to poetry to psychoanalysis.
Intricate as it is, there are certain threads that run through Mr Taylor's argument. The Enlightenment and the scientific revolution made it possible to think about the material world without reference to any transcendent power. He calls this way of thinking the “immanent frame”. But this frame is not hermetically sealed. People's yearning for, or intuition of, some ultimate meaning continues to break through in many different ways. One sign of divinity “breaking in” is the transcendental experience which can still be undergone by rational, modern people; he cites several descriptions of such moments, including one by Vaclav Havel, the Czech dissident-turned-president.
Mr Taylor accepts that the “liberation” from clerical power (over thought and society) that occurred during the Enlightenment amounted to something real and legitimate. But he picks apart some crude versions of post-Enlightenment secularism. In some secularist accounts, he notes, religion is presented as an odd, temporary delusion into which mankind was unfortunate enough to fall for a brief moment. Once science had proved the falsehood of religious statements about the origins of the world, man could “revert” to a more “natural” way of thinking. Mr Taylor argues that a secular, scientific way of thinking is also a sort of existential choice, a particular moment in human development rather than a “natural” state of affairs.
Mr Taylor also lays bare the inconsistencies of some secular critiques of religion. Many modern thinkers have criticised Christianity as a faith of repressive, life-denying killjoys; they say that by holding up asceticism as the ultimate ideal, Christianity denies the value of existence as it is enjoyed by most ordinary people, including erotic love and family life. At the same time, a more Nietzschean critique is advanced, finding that Christianity rejects humanity's most extreme passions, including those that drive people to accomplish heroic deeds. Mr Taylor argues that the task of holding together the ideal, the passionate and everyday life is as much a difficulty for post-Enlightenment secularists as it is for Christians.
Mr Taylor's field of study is the Christian West, broadly speaking Europe and North America—and that is more than enough to fill his pages. But he would not have to look very far outside that world to find new answers to the religious problems that he so meticulously describes. How, for instance, can the pious affirm the sanctity of the human body while urging people to discipline their bodily desires? Eastern Christianity, which takes a less pessimistic view of human nature than Augustine or Aquinas did, has answers to such dilemmas; so has Buddhism. But to go down those routes would, at Mr Taylor's careful pace, require thousands more pages of intricately woven argument.
http://www.economist.com/displaystory.cfm?story_id=9762713
http://www.hup.harvard.edu/catalog/TAYSEC.html
.
Posted by Reflection Cafe at 9/11/2007