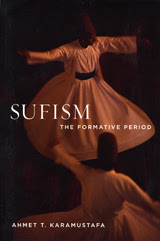 Ahmet Karamustafa
Washington University - St. Louis
University of California Press, 2007
.
"Karamustafa's new work is easily the best book I've read on the subject of early Sufism. The author does a fine job of combining analysis with synthesis, and he incorporates into his historical overview a generous sampling of the stories of a significant number of major characters. Perhaps the greatest achievement is Karamustafa's skill in making an immensely complex and potentially amorphous topic understandable. He manages to weave together very accessibly strands of history from diverse cultural and historical contexts across the central middle east, but the narrative remains concrete and avoids indulging more than necessary in discussing 'theoretical' issues. This is a very thoughtful treatment and I believe it will make a wonderful contribution toward a more integrated, comprehensive understanding of one of the most interesting subjects in late antique/early medieval Islamic religious history."--John Renard, St. Louis University

"Ahmet Karamustafa's Sufism: The Formative Period is an absorbing and persuasive presentation of the development of Sufism, based on a thorough mastery of the original sources and epitomizing the discoveries of modern scholarship. Students of Sufism and religious studies will welcome this important contribution to Islamic studies."--Carl W. Ernst, William R. Kenan, Jr., Distinguished Professor of Religious Studies, University of North Carolina at Chapel Hill

"Concisely and efficiently, Ahmet Karamustafa presents us with a survey of the early development of Sufism that is at once analytic and informative, and fully attentive to social and intellectual as well as purely religious concerns. It supersedes all previous overviews of the formative period of Sufi thought and institutions."--Hamid Algar, University of California, Berkeley

"Leaving behind the more speculative approaches to Sufism and Islam of an earlier generation, and based on a comprehensive review of the most recent results of international scholarship in the field, including the author's own original research work, this book provides a highly informative and objective historical overview of the main mystical movements that contributed significantly to the shaping of medieval Muslim society. Elegantly written, it is a must for all those concerned."--Dr. Hermann Landolt, McGill University, Montreal and Institute of Ismaili Studies, London

Ahmet T. Karamustafa bases this study on a fresh reading of the primary sources and, by integrating the findings of recent scholarship on the subject, presents a unified narrative of Sufism's historical development. His innovative analytical framework reveals the emergence of mystical currents in Islam during the ninth century and traces the rapid spread of Iraq-based Sufism to other regions of the Islamic world, providing an integrated, comprehensive understanding of one of the most compelling aspects of late antique, early medieval Islamic religious history.
.

Ahmet T. Karamustafa is Associate Professor of History and Religious Studies at Washington University in St. Louis. He is the author of God's Unruly Friends: Dervish Groups in the Islamic Later Middle Period, 1200-1550 (1994) and Vahidi's Menakib-i Hvoca-i Cihan ve Netice-i Can: Critical Edition and Historical Analysis (1993), and co-editor of Cartography in the Traditional Islamic and South Asian Societies (1992).