A Turkish Perspective on EU-Turkey relations 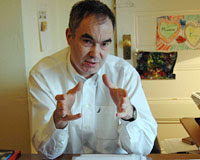 Interview by Anne Andlauer
.
Kemal Kirişci, a professor in Bosporus University’s department of political science, built on his long experience in Turkey-EU relations to discuss seven confusing aspects of the issue.

His conclusion -- Turkey will join the EU if it sticks to its guns -- derives from this extensive experience.
The real impact of EU integration on the transformation of Turkey’s democracy
“Considerable literature has been written on the topic, with authors interestingly reaching roughly the same conclusion that the European Commission Report of 2004 reached. The EU engagement has indeed led to Turkey’s transformation to the point where it sufficiently meets the Copenhagen political criteria. Although this may sound very banal, it does reflect a major transformation in Turkey. One concrete manifestation of this is the way in which the Republican People’s Party [CHP] is today unashamedly referring to Turkish citizens of ‘Kurdish origin’ or ‘descent.’ I would argue that only a few years ago, you would not have heard CHP supporters or the state establishment such as Faruk Loğoğlu, currently the president of the Eurasian Strategic Studies Center [ASAM], talk about the ‘Kurdish problem,’ as they would rather refer to the ‘Southeastern problem.’ That is just one manifestation of how those reforms have trickled down to today.”
What do you find most worrisome?
“There is also recognition that these reforms have been sliding back in certain areas -- freedom of expression being a conspicuous one. What I find most worrisome and disappointing is the way in which bureaucrats, who had begun to change and think European membership could be real, slipped back into old ways of thinking about Turkey’s relations with the external world and in particular Europe and the European Union. The old, established way of thinking is often referred to as the “Sevres Syndrome.” Until about a year ago, these bureaucrats had begun to look at the EU and to nongovernmental organizations from outside Turkey as partners. But now they are breaking that cooperation and are much more distrustful of the international community. It is this particular type of retreat that I am most concerned about, and I attribute it primarily and overwhelmingly to the EU’s attitude toward Turkey over the last year and a half.”
The slowing down of reforms: internal or external causes?
“Whether enthusiasm resurfaces and becomes conspicuous again will depend on the EU.”
“I would say the cause of that slipping back primarily comes from outside Turkey. It is especially driven by the ‘Nicolas Sarkozy factor,’ which encouraged Angela Merkel on that road. That has repercussions in Turkey as it does in the rest of Europe. Such repercussions have benefited those interest groups in Turkey who have always been skeptical about EU membership, and it has strengthened their hand vis-à-vis those who want the reform process to go ahead. In the government, on the other hand, I feel that there are those who had been genuinely committed to the European membership project, but there is also a group that had always been skeptical about it. I am speculating that this last group is quite happy at the moment. But then there is another group that is neutral and would not mind going along with the membership project, but is nervous about public opinion in Turkey. In 2006, the prime minister made a speech in Bilecik, which is a very symbolic city in the history of Turkish nationalism, and that was the point from which he could have fallen into the trap of populism and played the card of Turkish nationalism. But then he went back to a strategy that I think played a critical role in him winning the election this year. Right now, if there is indeed a reconsideration of Article 301 of the Turkish Penal Code (TCK), I think the larger group may take over again and that we may begin to see an EU enthusiasm, not matching the one from 2002-2004, but going at least half way there. Whether that enthusiasm surfaces and becomes conspicuous will again depend on the EU.”