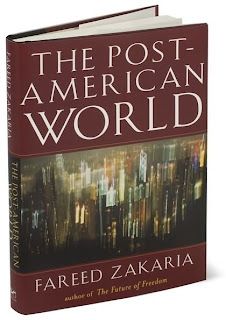 It's true China is booming, Russia is growing more assertive, terrorism is a threat. But if America is losing the ability to dictate to this new world, it has not lost the ability to lead.

Americans are glum at the moment. No, I mean really glum. In April, a new poll revealed that 81 percent of the American people believe that the country is on the "wrong track." In the 25 years that pollsters have asked this question, last month's response was by far the most negative. Other polls, asking similar questions, found levels of gloom that were even more alarming, often at 30- and 40-year highs. There are reasons to be pessimistic—a financial panic and looming recession, a seemingly endless war in Iraq, and the ongoing threat of terrorism. But the facts on the ground—unemployment numbers, foreclosure rates, deaths from terror attacks—are simply not dire enough to explain the present atmosphere of malaise.

American anxiety springs from something much deeper, a sense that large and disruptive forces are coursing through the world. In almost every industry, in every aspect of life, it feels like the patterns of the past are being scrambled. "Whirl is king, having driven out Zeus," wrote Aristophanes 2,400 years ago. And—for the first time in living memory—the United States does not seem to be leading the charge. Americans see that a new world is coming into being, but fear it is one being shaped in distant lands and by foreign people.

Look around. The world's tallest building is in Taipei, and will soon be in Dubai. Its largest publicly traded company is in Beijing. Its biggest refinery is being constructed in India. Its largest passenger airplane is built in Europe. The largest investment fund on the planet is in Abu Dhabi; the biggest movie industry is Bollywood, not Hollywood. Once quintessentially American icons have been usurped by the natives. The largest Ferris wheel is in Singapore. The largest casino is in Macao, which overtook Las Vegas in gambling revenues last year. America no longer dominates even its favorite sport, shopping. The Mall of America in Minnesota once boasted that it was the largest shopping mall in the world. Today it wouldn't make the top ten. In the most recent rankings, only two of the world's ten richest people are American. These lists are arbitrary and a bit silly, but consider that only ten years ago, the United States would have serenely topped almost every one of these categories.

These factoids reflect a seismic shift in power and attitudes. It is one that I sense when I travel around the world. In America, we are still debating the nature and extent of anti-Americanism. One side says that the problem is real and worrying and that we must woo the world back. The other says this is the inevitable price of power and that many of these countries are envious—and vaguely French—so we can safely ignore their griping. But while we argue over why they hate us, "they" have moved on, and are now far more interested in other, more dynamic parts of the globe. The world has shifted from anti-Americanism to post-Americanism.

I. The End of Pax Americana
During the 1980s, when I would visit India—where I grew up—most Indians were fascinated by the United States. Their interest, I have to confess, was not in the important power players in Washington or the great intellectuals in Cambridge.

People would often ask me about … Donald Trump. He was the very symbol of the United States—brassy, rich, and modern. He symbolized the feeling that if you wanted to find the biggest and largest anything, you had to look to America. Today, outside of entertainment figures, there is no comparable interest in American personalities. If you wonder why, read India's newspapers or watch its television. There are dozens of Indian businessmen who are now wealthier than the Donald. Indians are obsessed by their own vulgar real estate billionaires. And that newfound interest in their own story is being replicated across much of the world.

How much? Well, consider this fact. In 2006 and 2007, 124 countries grew their economies at over 4 percent a year. That includes more than 30 countries in Africa. Over the last two decades, lands outside the industrialized West have been growing at rates that were once unthinkable. While there have been booms and busts, the overall trend has been unambiguously upward. Antoine van Agtmael, the fund manager who coined the term "emerging markets," has identified the 25 companies most likely to be the world's next great multinationals. His list includes four companies each from Brazil, Mexico, South Korea, and Taiwan; three from India, two from China, and one each from Argentina, Chile, Malaysia, and South Africa. This is something much broader than the much-ballyhooed rise of China or even Asia. It is the rise of the rest—the rest of the world.

We are living through the third great power shift in modern history. The first was the rise of the Western world, around the 15th century. It produced the world as we know it now—science and technology, commerce and capitalism, the industrial and agricultural revolutions. It also led to the prolonged political dominance of the nations of the Western world. The second shift, which took place in the closing years of the 19th century, was the rise of the United States. Once it industrialized, it soon became the most powerful nation in the world, stronger than any likely combination of other nations. For the last 20 years, America's superpower status in every realm has been largely unchallenged—something that's never happened before in history, at least since the Roman Empire dominated the known world 2,000 years ago. During this Pax Americana, the global economy has accelerated dramatically. And that expansion is the driver behind the third great power shift of the modern age—the rise of the rest.

At the military and political level, we still live in a unipolar world. But along every other dimension—industrial, financial, social, cultural—the distribution of power is shifting, moving away from American dominance. In terms of war and peace, economics and business, ideas and art, this will produce a landscape that is quite different from the one we have lived in until now—one defined and directed from many places and by many peoples.

The post-American world is naturally an unsettling prospect for Americans, but it should not be. This will not be a world defined by the decline of America but rather the rise of everyone else. It is the result of a series of positive trends that have been progressing over the last 20 years, trends that have created an international climate of unprecedented peace and prosperity.

I know. That's not the world that people perceive. We are told that we live in dark, dangerous times. Terrorism, rogue states, nuclear proliferation, financial panics, recession, outsourcing, and illegal immigrants all loom large in the national discourse. Al Qaeda, Iran, North Korea, China, Russia are all threats in some way or another. But just how violent is today's world, really?

A team of scholars at the University of Maryland has been tracking deaths caused by organized violence. Their data show that wars of all kinds have been declining since the mid-1980s and that we are now at the lowest levels of global violence since the 1950s. Deaths from terrorism are reported to have risen in recent years. But on closer examination, 80 percent of those casualties come from Afghanistan and Iraq, which are really war zones with ongoing insurgencies—and the overall numbers remain small. Looking at the evidence, Harvard's polymath professor Steven Pinker has ventured to speculate that we are probably living "in the most peaceful time of our species' existence."

Why does it not feel that way? Why do we think we live in scary times? Part of the problem is that as violence has been ebbing, information has been exploding. The last 20 years have produced an information revolution that brings us news and, most crucially, images from around the world all the time. The immediacy of the images and the intensity of the 24-hour news cycle combine to produce constant hype. Every weather disturbance is the "storm of the decade." Every bomb that explodes is BREAKING NEWS. Because the information revolution is so new, we—reporters, writers, readers, viewers—are all just now figuring out how to put everything in context.