Osman's Dream: The History of the Ottoman Empire 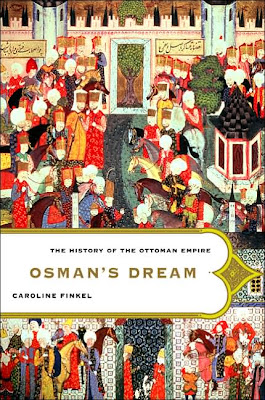 The Ottoman Empire was one of the largest and most influential empires in world history. Its reach extended to three continents and it survived for more than six centuries, but its history is too often colored by the memory of its bloody final throes on the battlefields of World War I. In this magisterial work-the first definitive account written for the general reader-renowned scholar and journalist Caroline Finkel lucidly recounts the epic story of the Ottoman Empire from its origins in the thirteenth century through its destruction in the twentieth.

What Finkel calls the "old" narrative of the Ottoman Empire is simple to relate: "it rose, declined, and fell." An exotic parade of salacious sultans, grand viziers and duplicitous eunuchs inhabit the sultry harems and domed palaces of Istanbul-at least in our imaginations. Finkel, a long-time resident of Turkey and Ottoman scholar, relates a "new" narrative of empire that properly accounts for the richness and complexity of the Ottoman state over nearly seven centuries. By presiding over their multiethnic empire for so long, and ushering it from medievalism to modernity, the Ottomans should be ranked alongside the Hapsburgs and the Romanovs, she argues. That they are overlooked is the fault of Western historians who have peered at their subjects through the lens of their own prejudices. Finkel's striking innovation is to turn a mirror on the Ottomans and examine how they saw themselves and their empire. While this approach yields a refreshingly original perspective, Finkel's quest to improve Westerners' understanding occasionally leads her into some questionable stretches (an implication, for instance, that Westerners think all Muslims are terrorists). Happily, these remain unintrusive and this history makes a riveting and enjoyable read for all audiences. 16 pages of photos; maps. (Mar.) Copyright 2005 Reed Business Information.

In the year 1300, Osman, a Muslim tribal leader in Asia Minor (the future Turkey), dreamed that he would found a great, centuries-spanning empire. Of course, he and his descendants fulfilled that vision with the Ottoman Empire, which lasted from the Crusades until after World War I. Finkel, a noted Ottoman scholar who contributed to the History Channel's forthcoming special, The Ottoman Empire, has penned possibly the first book in English on the entire history of the Ottoman Empire for general readers. In her well-written narrative, she breaks with Western scholarship by not treating the empire as the stereotypical "Sick Man of Europe," preferring to let the extensive Turkish sources tell a story of an enormous, complex, multiethnic state. Her story culminates with the rise of the Turkish republic in the early 1920s and a new founding myth based on the speech of Mustafa Kemal (Atat rk). Finkel, writing from the Turkish point of view, uses Turkish titles and place names that will be unfamiliar to most of her audience. In spite of this, her book should be in most general and academic libraries.-Robert Harbison, Western Kentucky Univ. Lib., Bowling Green Copyright 2006 Reed Business Information.

Readable survey of one of the world's great empires. Founded by the Turkoman Emir Osman, who had dreamed that he was destined to do so, the Ottoman Empire lasted 600 years and came to incorporate much of western Asia, northeastern Africa and southeastern Europe. Yet, as British historian Finkel tells it in her U.S. debut, though the dominion may have been vast, it was also tenuous. The Ottomans conquered most of the Arabian peninsula, for instance, but for some reason could never take control of the rich province of Yemen, "singularly failing to subdue it" over the course of a century. They were more effective closer to home, forging an empire by gathering rural Anatolians of many ethnicities and religions and moving them into Istanbul. They similarly pacified the countryside, establishing tight control over the comings and goings of the citizenry. In its more tranquil moments, the Ottoman Empire was an oasis of learning, with much attention given to pleasures and vices. (Its rulers, Finkel writes, appreciated that tobacco and alcohol served "as a means of raising ready cash.") When bellicose, it was something to fear, as the good citizens of Austro-Hungary and various Balkan principalities understood. The empire dwindled in the 18th and early-19th centuries, as Russia seized the Crimea, and Greece gained independence; it disintegrated rapidly in the early-20th century with the collapse of the Central Powers with which the last Ottomans had allied themselves. Finkel's text is a satisfying blend of narrative history, anecdote and character study (featuring such players as "Fairskinned Bosnian" Suleyman Agha and Chief Black Eunuch Yusuf Agha). Her careful but brief discussion of theArmenian genocide, however, may not please readers with a stake in either side of the issue. The more we know about the Ottomans, the more easily comprehensible the subsequent history of the region they ruled becomes. Finkel's study makes a useful contribution.

Caroline Finkel has lived in Istanbul for many years and traveled widely in Turkey and the former Ottoman lands. She has a doctorate in Ottoman history from the School of Oriental and African Studies at the University of London. Osman’s Dream is her third book. She currently divides her time between Istanbul and London.