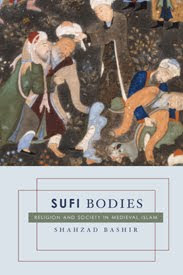 Shahzad Bashir, Stanford University
Columbia University Press, 2011
Between 1300 and 1500 C.E. a new form of Sufi Islam took hold among central Islamic peoples, joining individuals through widespread networks resembling today’s prominent paths and orders. Understanding contemporary Sufism requires a sophisticated analysis of these formative years. Moving beyond a straight account of leaders and movements, Shahzad Bashir weaves a rich history around the depiction of bodily actions by Sufi masters and disciples, primarily in Sufi literature and Persian miniature paintings of the period.
Focusing on the Persianate societies of Iran and Central Asia, Bashir explores medieval Sufis’ conception of the human body as the primary shuttle between interior (batin) and exterior (zahir) realities. Drawing on literary, historical, and anthropological approaches to corporeality, he studies representations of Sufi bodies in three personal and communal arenas: religious activity in the form of ritual, asceticism, rules of etiquette, and a universal hierarchy of saints; the deep imprint of Persian poetic paradigms on the articulation of love, desire, and gender; and the reputation of Sufi masters for working miracles, which empowered them in all domains of social activity. Bashir’s novel perspective illuminates complex relationships between body and soul, body and gender, body and society, and body and cosmos. It highlights love as an overarching, powerful emotion in the making of Sufi communities and situates the body as a critical concern in Sufi thought and practice. Bashir’s work ultimately offers a new methodology for extracting historical information from religious narratives, especially those depicting extraordinary and miraculous events.
REVIEWS
"This is an excellent work that is a must read for anyone interested in the history of Sufism, the history of Iran and Central Asia, the role of the body in Islam, and the nature of religious authority in Islamic society. A superb book that is not at all likely to be replaced as an authoritative source for many years to come." — Jamal Elias, University of Pennsylvania
"Sufi Bodies is an innovative treatment of Sufi materials that will find a large readership not only in the field of Sufism but also more broadly in the fields of comparative mysticism, religious studies, and the history of sexuality. A paradigm shifting book that is a pleasure to read." — Kathryn Babayan, University of Michigan
"Sufi Bodies provides a very useful, alternative view of Sufi issues, such as love and discipleship, that are often treated in abstract and ethereal—in a word, disembodied—terms. It will prove valuable for a range of audiences and courses." — Marion Katz, New York University"
In Sufi Bodies, Shahzad Bashir, like a litterateur turned detective, exhumes and examines the hidden physicality of premodern Persian Sufism. From food and women to grave sites, he weaves a tapestry of connections to the social and intellectual world of Sufis, with emotive, affective and spiritual messages registered through the body and bodily activities. At once forensic and lyrical, this book provides an interior journey that is inseparable from its external traces in the literary treasure of Sufi adepts. It both complements and exceeds other studies of a pivotal period in Islamic spirituality." — Bruce B. Lawrence, Duke University
Excerpt:
http://cup.columbia.edu/bookpreview/978-0-231-14490-2/
http://cup.columbia.edu/book/978-0-231-14490-2/sufi-bodies
Posted by Reflection Cafe at 10/24/2011