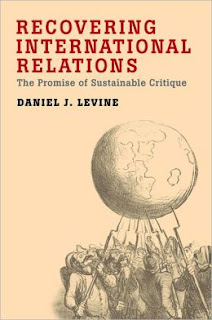 Recovering International Relations bridges two key divides in contemporary IR: between 'value-free' and normative theory, and between reflective, philosophically inflected explorations of ethics in scholarship and close, empirical studies of practical problems in world politics. Featuring a novel, provocative and detailed survey of IR's development over the second half of the twentieth century, the work draws on early Frankfurt School social theory to suggest a new ethical and methodological foundation for the study of world politics-sustainable critique-which draws these disparate approaches together in light of their common aims, and redacts them in the face of their particular limitations. Understanding the discipline as a vocation as well as a series of academic and methodological practices, sustainable critique aims to balance the insights of normative and empirical theory against each other. Each must be brought to bear if scholarship is to meaningfully, and responsibly, address an increasingly dense, heavily armed, and persistently diverse world.

"In this erudite and well-written study, critical theory is mobilized to critique international relations theory in a thoughtful, creative and productive way. Drawing on the work of Theodor Adorno, Levine contends that postwar IR theory lacks, and desperately needs, a sustainable practice of critique to minimize and cope with the reifications employed and encouraged by all current approaches and theorists."--Richard Ned Lebow, King's College London
"Levine has written an incisive meditation on the 'timeless questions' of theorizing about world politics, and a provocation to their renewed examination. Recovering International Politics is meant to be argued with and about; it is an erudite challenge that is worth reading. Indeed, I don't agree with all of it, but I think more clearly for having read it."--Neta C. Crawford, Boston University
"Taking us on a remarkable historical journey through a broad array of international theoretical scholarship, Daniel Levine demonstrates that normative commitments are foundational to all theoretical enterprises and challenges each of us to be critically self reflective about our own ethical commitments. An important book that helps us to envisage a discipline that can take better account of the multiple histories and lived experiences of all peoples in our diverse world."--J. Ann Tickner, School of International Relations, University of Southern California
"Levine's Recovering International Relations is a crucial contribution to IR theory. By returning to the work of Frankfurt School philosophers (Adorno, in particular), Levine brilliantly demonstrates that what he calls 'sustainable critique' is not at all foreign to IR theory and, if taken seriously, can take us past the sterile and all too fashionable opposition between normative theory and value-free knowledge in IR. Levine's book is a refreshing, philosophically rich, and carefully crafted revisiting of IR as a vocation and a way of thinking world problems that is sure to become an essential reading for anyone interested in the power and place of critique in theory and practice."--François Debrix, Virginia Tech
"Harnessing Adorno's negative dialectics to the discipline of IR, Daniel Levine makes a strong call for critical reflective thinking in all the paradigms of IR theory. Ambitious and dense, the call also provides an important theoretical space in which a fluid notion of practical reason in world politics can be developed."--Richard Beardsworth, Professor of IR Theory, Florida International University


Introduction: Sustainable Critique and the Lost Vocation of International Relations

Chapter One: "For We Born After:" The Challenge of Sustainable Critique

Chapter Three: The Realist Dilemma: Politics and the Limits of Theory

Chapter Four: Communitarian IR Theory: "The Common Socius of us All"