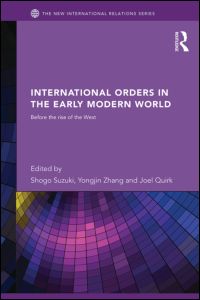 Before the Rise of the West

This book examines the historical interactions of the West and non-Western world, and investigates whether or not the exclusive adoption of Western-oriented ‘international norms’ is the prerequisite for the construction of international order.
This book sets out to challenge the Eurocentric foundations of modern International Relations scholarship by examining international relations in the early modern era, when European primacy had yet to develop in many parts of the globe. Through a series of regional case studies on East Asia, the Middle East, Africa and Latin America, and Russia written by leading specialists of their field, this book explores patterns of cross-cultural exchange and civilizational encounters, placing particular emphasis upon historical contexts. The chapters of this book document and analyse a series of regional international orders that were primarily defined by local interests, agendas and institutions, with European interlopers often playing a secondary role. These perspectives emphasize the central role of non-European agency in shaping global history, and stand in stark contrast to conventional narratives revolving around the ‘Rise of the West’, which tend to be based upon a stylized contrast between a dynamic ‘West’ and a passive and static ‘East’.
Focusing on a crucial period of global history that has been neglected in the field of International Relations, International Orders in the Early Modern World will be interest to students and scholars of international relations, international relations theory, international history, early modern history and sociology.
REVIEWS
"An outstanding volume of non-Eurocentric historical-sociological essays that advances an extremely powerful critique of the English School’s commitment to what I call the ‘Eurocentric big bang theory of world politics’ – that the big bang of modernity exploded autonomously within Europe and that thereafter European ‘civilization’ expanded outwards in a non-problematic way to remake the world in its own image – by deploying the antidote of bringing Eastern agency back into the story of the long-term development of world politics." - John M. Hobson, Professor of Politics and International Relations, University of Sheffield, UK.
"Perhaps ‘1648 and all that’ fundamentally distorts our understanding of the history of international relations. By rediscovering early modern and non-western international orders, this expert team sets out a challenge to IR scholarship. It is especially welcome and important in making sense of the profound changes currently underway." - Ian Clark, E. H. Carr Professor of International Politics, Aberystwyth University
"Maps centered on the South Pole are amusing, but international relations books centered on the non-Western world are essential. From its origins, international relations theory has been a Western enterprise with other parts of the world largely ignored or analyzed through parochial and often inappropriate conceptions. Suzuki, Zhang, Quirk and their collaborators turn the tables and offer perspectives on Europe from East Asia, the Middle East, Africa and Latin America, and generally at a time when European interlopers were unable to impose their preferences on these cultures. They effectively demonstrate the importance of non-Western cultures and their ideas in shaping global history." - Richard Ned Lebow, Professor of International Political Theory, King's College London, UK
CONTENTS
Introduction Shogo Suzuki, Yongjin Zhang and Joel Quirk 1. Europeans and the Steppe: Russian lands under the Mongol Rule Iver B. Neumann 2. Europe, Islam and Pax Ottomana, 1453-1774 Ayla Göl 3. Curious and Exotic Encounters: Europeans as Supplicants in the Chinese Imperium, 1513-1793 Yongjin Zhang 4. Europe at the Periphery of the Japanese World Order Shogo Suzuki 5. A Corrupt International Society: How Britain Was Duped into its First Indian Conquest Darshan Vigneswaran 6. International Relations in the Americas during the Long Eighteenth Century, 1663-1820 Charles Jones 7. Europeans, Africans and the Atlantic World, c1450-1850 Joel Quirk and David Richardson Conclusion: Eurocentrism, World History, Meta-narratives and the meeting of international societies Richard Little
AUTHORS
Shogo Suzuki is Senior Lecturer in the Department of Politics at University of Manchester, UK.
Yongjin Zhang is Professor of International Politics at Bristol University, UK.
Joel Quirk is Senior Lecturer in the Department of Political Studies at the University of the Witwatersrand, South Africa.