Common sense shows that human life is short-lived and that is best to make of our berief sojourn on this Earth something that is useful to oneself and others.

Let us cultivate love and compassion, both of which give true meaning to life. This is the religion I preach, more so than Buddhism itself. It is simple. Its temple is the heart. Its teaching is love and compassion. Its moral values are loving and respecting others, whoever they may be. Whether one is a layperson or a monastic, we have no other option if we wish to survive in this world.

To be kind, honest and have positive thoughts, to forgive those who harm us and treat everyone as a friend; to help those who are suffering and never to consider ourselves superior to anyone else; even if this advice seems rather simplistic, make the effort of seeing whether by following it you can find greater happiness.

In modern society, we tend to overlook what I call natural human qualities- kindness, compassion, understanding, and forgiveness. In childhood it is easy to make friends. You only have to laugh with someone once and immediately you are friends. Children do not ask about the other’s race or profession. The main thing is that the other person is human being like us and that we relate to him or her.
Inner happiness is not determined by material circumstances or sensual gratification. It depends on our mind. The most vital thing is to recognize how important this kind of happiness really is.

Men and women are, of course, physically different and this entails a number of differences on the emotional level. But their way of thinking, their sensations and every other aspect of their personalities are basically the same. Men are more able to do heavy work; women seem more efficient at tasks which require clear and quick thinking. Men and women are usually equals in areas where reflection plays a key role.

It is to say that most of us dislike thinking about our own death. We spend most of our lives amassing possessions or embarking on an endless number of projects, as though we were going to live for ever, as though it was not absolutely certain that one day – tomorrow perhaps, or even in the next moment we will leave everything behind.

I am convinced that the progress or decline of humanity rests very largely with educators and teachers, who therefore have a tremendous responsibility.

Teach students to debate and to resolve conflicts in a non-violent way; and as soon as there is a disagreement, teach them to take interests in what the other person thinks. Teach them not to view things in a narrow-minded way; not to think only of themselves, their community, their country, or their race, but to realize that all beings have the same rights and the same needs. Make them aware of our universal responsibility; show them that whatever we do matters, and that everything has an effect on the rest of the world.

When you help someone, do not content with solving their immediate problems by giving money, for example. Give them also the means to resolve their problems themselves.

The economy should not prosper at the expense of human values. We should stick to honest practice and not sacrifice our inner peace for profits. If everything were to be justified by profit, why did we abolish slavery? I believe that noble ideals are the true indices of progress. 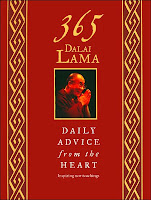