A Small Treatise on the Great Virtues 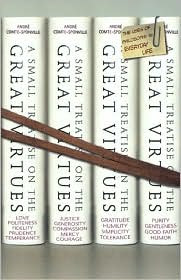 An utterly original exploration of the timeless human virtues and how they apply to the way we live now, from a bold and dynamic French writer.

In this graceful, incisive book, writer-philosopher André Comte-Sponville reexamines the classic human virtues to help us under-stand "what we should do, who we should be, and how we should live." In the process, he gives us an entirely new perspective on the value, the relevance, and even the charm of the Western ethical tradition.

Drawing on thinkers from Aristotle to Simone Weil, by way of Aquinas, Kant, Rilke, Nietzsche, Spinoza, and Rawls, among others, Comte-Sponville elaborates on the qualities that constitute the essence and excellence of humankind. Starting with politeness -- almost a virtue -- and ing with love -- which transcs all morality -- A Small Treatise on the Great Virtues takes us on a tour of the eighteen essential virtues: fidelity, prudence, temperance, courage, justice, generosity, compassion, mercy, gratitude, humility, simplicity, tolerance, purity, gentleness, good faith, and even, surprisingly, humor.Sophisticated and lucid, full of wit and vivacity, this modestly titled yet immensely important work provides an indispensable guide to finding what is right and good in everyday life.

An energized discussion of essential virtues for everyday living, by a young French philosopher. Comte-Sponville (Sorbonne), author of scholarly philosophy texts, targets a wider contemporary audience with this title, so far translated into 19 languages. His premise is elegant: a linked series of 18 essays on the virtues most consistently explored and advocated in world philosophy. Roughly speaking, he begins with virtues that are exterior and personal (politeness, fidelity, prudence, temperance), moves through necessary "social" virtues (courage, justice, generosity, compassion, mercy), to more ethereal, "Zen"-like qualities (gratitude, humility, simplicity, tolerance), and on to those that permit the previous virtues to enhance society (purity, gentleness, good faith, humor, and love). His exploration of each virtue is detailed and limber, reliant both on the work of his predecessor philosophers (Aristotle and Plato, Thomas Aquinas and Spinoza, Simone Weil) and on his own hypothetical situations to "test" such virtues. For example, he frequently considers the Third Reich as a society that burnished essential values in the context of perverting them, noting that a polite Nazi is arguably crueler than a brutish one. Comte-Sponville relishes challenging the paradoxes inherent in contemporary mores, as in his assertion that "universal tolerance would also be self-contradictory in practical terms and thus not just morally reprehensible but also politically doomed." Elsewhere, he explores the fine distinctions that are obliterated by monolithic conceptions of virtue, William Bennett-style, as regarding "Purity," which he demonstrates does not exclude the range of human sexuality,evident in Lucretius' conception of pura voluptas, "pure pleasure." Throughout, Comte-Sponville captures (and sometimes confounds) our attention with a wry, prickly tone, expanding the understanding of how philosophy addresses human traits, and forcing us to confront our social behavior relative to our highest (and lowest) impulses. An effervescent primer of the morally examined life.

André Comte-Sponville is one of the most important and popular of the new wave of young French philosophers. Now in his early forties, he teaches at the Sorbonne and is the author of five highly acclaimed scholarly books of classical philosophy. A Small Treatise on the Great Virtues spent fourteen months on the French bestseller list and is being translated into nineteen languages. He lives in Paris.


Full-text of the book is available at Google, click here.