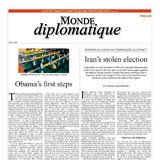 The gains of the far right in the European elections mean a revival not of fascism, but of populism – which is unable to transform people’s anger and mistrust into a new political vision.

What do the results of the European elections really mean? And beyond a memorable bust-up on French television between green ’68er Daniel Cohn-Bendit and centrist presidential hopeful, François Bayrou, what will people remember about the elections? Participation was the lowest it has ever been since direct elections to the European parliament were introduced in 1979. Vaclav Klaus, president of the Czech Republic and renowned Eurosceptic, dubbed the elections in his country “one quarter elections”, referring to the 28% turnout. The Economist’s Charlemagne suggests that the European parliament should be wound down altogether, as with a failed experiment (1).

But for all the apathy, the election results provide important insights into contemporary European politics. For a start, it offered clear proof of the ambivalent relationship between economic downturn and the popularity of leftwing politics. Since the beginning of the financial meltdown, Karl Marx has, for some, suddenly become relevant after all. But this renewed interest in theories of economic crisis is only skin-deep, for it has had little political impact. Anti-globalisation movements like Attac, popular in the late 1990s and early 2000s, have failed to win support in spite of the downturn. And the same has happened in the European elections, though many expected far left parties to do well.

In France, Olivier Besançenot formed a New Anti-Capitalist Party (NPA). In Germany, the amalgam of the breakaway leftwing of the Social Democrat Party and the former East German communist party, known as the Left Party (Die Linke), was also expected to do well. More centrist parties, such as the French and Spanish Socialists, were also hoping to profit from the crisis.

The opposite proved true. Across Europe, voters abandoned the left. In France, the governing UMP party was a victim of its own success: winning twice as many seats as in 2004, Sarkozy has had to renege on his promise to send all his party’s candidates, if elected, to Brussels. The biggest losers in France were the Socialists: they lost almost half their seats and in some regions were pushed into third place behind a newly formed green party, Europe Écologie. Led by a motley crew of activist environmentalists, including Daniel Cohn-Bendit, José Bové and Éva Joly, Europe Écologie were one of the big winners in the election. Besançenot’s NPA failed to make any impact: with just under 5% of votes, they won no seats to the European parliament.

In Britain, the Labour Party was left with its worst election result since 1918. In Germany, the Social Democrat Party won only 20.8% of the vote, a historic low for the party. Die Linke’s percentage of the vote rose but only marginally, from 6.1% to 7.5%. In Spain, the incumbent Socialist Party came second behind the rightwing Popular Party and in Italy the opposition centre-left Democratic Party won just under 27% of the vote – not enough to beat Berlusconi but enough to avoid a collapse in the leadership.

At this time of economic crisis, centre left and leftwing parties across Europe have failed to win over voters. Pundits are writing of a “blue wave” sweeping Europe: many are concerned that the current crisis has swelled support for the far right rather than the far left.

The elections were marked by the success of far right parties. The British National Party (BNP) in the UK won two seats in the European parliament. In Hungary, a neo-fascist group with its own military wing, Jobbik, won three out of 22 seats. In Italy, the Northern League made gains, reaching 10% of the vote. In Austria, the Freedom Party, set up by the late Jörg Haider, doubled its vote to 13%. In Holland, the Freedom Party led by Geert Wilders won 17% of the vote, giving it four seats.

Was this set to be a breakthrough for the far right, an ominous sign that in difficult times European voters tend towards chauvinism, xenophobia and racism? The Times correspondent for eastern Europe, Adam LeBor, certainly thinks so, writing a timely political thriller The Budapest Protocol about a rightwing takeover of eastern Europe in the shadow of a Brussels superstate (2).

In truth, the far right groups remain very marginal in Europe and the trend is weak and uneven. In Poland, the results of the 2004 election – which saw the Catholic League of Polish Families and the peasant movement Sambroona both win seats in parliament – were reversed this time around, with Polish commentators celebrating the “maturity” of their population who opted instead for mainstream parties.

The real lesson is two-fold. The first is that governments, in Britain and elsewhere, have given up democracy to these far right movements: instead of arguing with them or challenging their ideas, mainstream parties have refused to engage with them. This was the message of the UK Labour Party’s European election campaign: vote for us in order to prevent the BNP getting in. It was also a general theme of the European elections: the choice is between mainstream parties or rightwing populist extremists.

This message does little more than pander to middle class prejudices about racist working class voters. When French National Front (FN) leader Jean-Marie Le Pen won through into the second round of the presidential election in 2002, the French media went in search of infamous FN voters as if they were a curious new species of homo sapiens. Such reactions only reveal the gap between the political establishment and society at large. And they misrepresent what is occurring as a revival of racist and fascist ideology. A closer look reveals a different dynamic.

The second lesson is that the far right movements are more populist than racist. The BNP’s campaign in the UK was about MPs’ expenses: the slogan of its poster campaign was “Punish the pigs” (the pigs being the politicians). In Hungary, support for the far right is not reducible to anti-Roma sentiment. As recently as 2006, Hungarians were demonstrating outside their parliament, demanding the resignation of a prime minister whose cynical comments about his own party sparked growing disenchantment with the political class.

Rather than a significant shift to the right, these groups signal the end of left and right. They express anger, disenchantment and frustration, but not a coherent new ideology or the rebirth of old fascist political traditions (3). The desire to protest, not to take power, animates the votes for the far right today. Contemporary populism is in part a product of the EU’s own preference for taking decisions behind closed doors. But there is no perfect symmetry between the EU’s contempt for democracy and the current populist backlash. This is because the EU doesn’t stand above member states but is rather the mode of politics that prevails in relations between national capitals. The contemporary backlash has domestic roots, evident in the very marginal role played by EU-related issues in the 2009 campaign.

That populism has become the new opposition is demonstrated in the rise and fall of Libertas, the pan-European political party set up by Declan Ganley in late 2008. Libertas appeared at a time when governments across Europe were intent on preventing their populations from having a vote on the Lisbon Treaty: the British government reneged on an election promise, the Irish were asked to vote again, and France and Germany agreed between themselves to avoid any more referendums (4). Libertas promised to unravel this “anti-referendum pact” by making the June elections into a pan-European referendum on Lisbon.

In the end, this message was lost. Owing to its lack of any social base across Europe, Libertas made alignments with widely different national parties. It had no clear pan-European message beyond a vague call for more democracy and transparency. As a result, it was drawn into national political battles, which it invariably lost. In the UK, it made no impact whatever, unable to distinguish itself from the EU-critical voices of the Conservatives and UK Independence Party (UKIP).

Recent crises have discredited political institutions. The economic crisis has raised doubts about the capacity of governments to manage the markets. The crisis in political representation – from British MPs’ expenses scandal to the fuss over Berlusconi’s relationship with minors – has left many people disaffected and disenchanted with their elected representatives. But these sentiments have not given birth to anything new. Anti-establishment figures will continue to emerge but only as charismatic individuals, not as embodiments of new political ideas. This was the lesson of Declan Ganley’s European crusade.

There is no European lurch to the right. There is an entrenchment of populism as the new political opposition in Europe – but one that remains devoid of political ideas, unable to transform people’s anger and mistrust of the establishment into a new political vision or programme.