Contemporary Capitalism and Its Crises 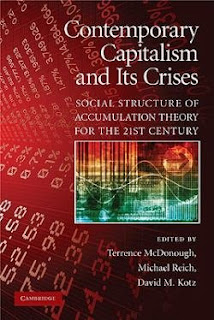 This volume analyses contemporary capitalism and its crises based on a theory of capitalist evolution known as the social structure of accumulation (SSA) theory. It applies this theory to explain the severe financial and economic crisis that broke out in 2008 and the kind of changes required to resolve it. The editors and contributors make available new work within this school of thought on such issues as the rise and persistence of the “neoliberal,” or “free-market,” form of capitalism since 1980 and the growing globalization and financialization of the world economy. The collection includes analyses of the U.S. economy as well as that of several parts of the developing world.

Part I. The Theory of Social Structures of Accumulation:

1. The state of the art of social structure of accumulation theory Terrence McDonough;

Part II. Globalization and the Contemporary Social Structure of Accumulation:

5. Globalization of spatialization? The worldwide spatial restructuring of the labor process Michael Wallace and David Brady;

Part III. The Contemporary Social Structure of Accumulation in the United States:

8. Labor in the contemporary social structure of accumulation Sam Rosenberg;

9. The rise of CEO pay and the contemporary social structure of accumulation in the U.S. Robert Boyer;

Part IV. Social Structure of Accumulation Theory and Transformations of the Capitalist Periphery:

11. The social structure of accumulation in South Africa James Heintz;

12. Social structures of accumulation and the condition of the working class in Mexico Carlos Salas;

13. Social structures of accumulation for the Arab world: the economies of Egypt, Jordan and Kuwait in the regional system Karen Pfeifer.

“The ‘Great Recession’ of 2007–2009 caught most social scientists by surprise because they assumed that modern societies had eliminated deep economic crises. Fortunately, some dissenting scholars have continued to probe the regularities of economic cycles of booms and busts. This volume brings together some of the best of that work at a time when both scholars and policy makers urgently need to revise their core beliefs. It deserves a broad audience.” – Fred Block, University of California at Davis

“At a time when the specter of irrelevance is haunting conventional macroeconomics, a group of economists who ‘got it right’ long before the current economic debacle explain why history, institutions, and politics all matter in understanding capitalism’s booms and busts.” – Samuel Bowles, Santa Fe Institute

“There are two crucial questions that confront political economy in the wake of the global economic and financial crisis. Can the current globally integrated neoliberal economic and financial regime survive? If it does not survive, what kind of economic regime is likely to replace it? This book is ideally suited to help the reader think productively about these questions because it effectively explains, evaluates, and updates the most useful framework within which to consider them – social structure of accumulation theory – and uses it to explore possible answers.” – James Crotty, University of Massachussetts, Amherst

“Social structure of accumulation (SSA) theory provides an essential foundation for understanding the long-term ups and downs of the economy and the crisis that emerged in 2007–2008 in particular. This book provides an essential foundation for understanding SSA theory. Read it and understand! Understand how markets are intertwined with and depend on a complex of social and political institutions, how those institutions provide the basis for periods of economic expansion, and how the breakdown of those institutions leads to economic crisis and change. McDonough, Reich, and Kotz have brought together a set of essays that not only provide this understanding but also develop SSA theory. A most useful book!” – Arthur MacEwan, University of Massachusetts, Boston

“As the leading governments of the world abandon neoliberalism and grope toward a new way of managing markets, it is time for economists to seriously explore the role of institutions in economic growth and income distribution. This volume provides a valuable update and refinement of the social structures of the accumulation approach to understanding market economies. The historical and conjuctural analysis is first rate. The larger contribution of this volume is how it forcefully pushes macroeconomics back in touch with the real world.” – William Milberg, New School for Social Research