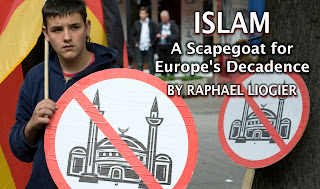 How Muslims Have Been Taken Hostage by Europe’s Most Acute Civilizational Crisis Since WWII
Raphaël Liogier, Harvard International Review- Jan 2011
Raphaël Liogier is the director of the Observatoire du religieux (www.world-religion-watch.org) and a University Professor in Sociology and Theory of Knowledge at the Institute for Political Studies of Aix-en-Provence [7] in France (Science Po Aix). His last book, Souci de Soi, Conscience du Monde : Self Care, World Awareness, deals with the different aspects of the current individualization and globalization of beliefs.