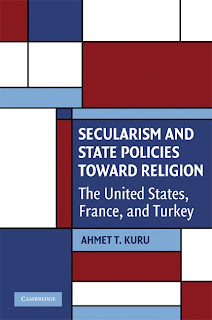 Ahmet T. Kuru, San Diego State University
Cambridge University Press, 2009
Why do secular states pursue different policies toward religion? This book provides a generalizable argument about the impact of ideological struggles on the public policy making process, as well as a state-religion regimes index of 197 countries. More specifically, it analyzes why American state policies are largely tolerant of religion, whereas French and Turkish policies generally prohibit its public visibility, as seen in their bans on Muslim headscarves. In the United States, the dominant ideology is "passive secularism," which requires the state to play a passive role, by allowing public visibility of religion. Dominant ideology in France and Turkey is "assertive secularism," which demands that the state play an assertive role in excluding religion from the public sphere. Passive and assertive secularism became dominant in these cases through certain historical processes, particularly the presence or absence of an ancien régime based on the marriage between monarchy and hegemonic religion during state-building periods.

Table of Contents
1. Analyzing secularism: history, ideology, and policy
Part I. The United States:
2. Passive secularism and the Christian right's challenge (1981–2008)
3. Religious diversity and the evolution of passive secularism (1776–1981)
Part II. France:
4. Assertive secularism and the multiculturalist challenge (1989–2008)
5. The war of two Frances and the rise of assertive secularism (1789–1989)
Part III. Turkey:
6. Assertive secularism and the Islamic challenge (1997–2008)
7. Westernization and the emergence of assertive secularism (1826–1997)
Reviews
"Professor Kuru's authoritative study, written with remarkable precision, asks taboo-breaking questions and provides iconoclastic responses to them in strict accordance with the maxim facta non verba. First, it shatters the deeply internalized myth that Turkish laïcité is unquestionably sui generis and thus cannot be compared with any other case. Second, it rebuffs the widely accepted premise that Islam and secularism are inherently incompatible, and that assertive secularism would therefore be the only working model for Muslim societies. Third, it clearly shows that in its application of assertive secularism Turkey has gone far beyond its historical model, the French laïcité of the Third Republic. This exemplary piece of scholarship further offers invaluable insight into the present-day tug-of-war over secularism in Turkey." - M. Şükrü Hanioğlu, Princeton University
"Kuru's work speaks to a wide audience. Substantively, it explains both the formation and policy consequences of various forms of secularism, which should interest scholars and students of a wide array of subjects. With a precise analytical framework and engaging historical narrative, it introduces the relevance of ideology to the study of religion and politics. It also combines deductive theory witha rich empirical analysis that is sensitive to the historical context. This book deserves high praise for managing to cross so many boundaries in such a sophisticated manner." - Middle East Policy
"...Kuru demonstrates that much can be gleaned from further study of these three constitutionally secular cases. Secularism and State Policies Towards Religion sets a new standard for such studies and should be required reading for anyone interested in the relationship between religion and state.... While Kuru focuses on three states, his theoretical framework is potentially applicable to a wider range of states. I believe the significance of this contribution will be seen in future studies of the role of religion in government policy in which I expect this book to become a required citation." - Jonathan Fox, Bar Ilan University, Journal for the Scientific Study of Religion
"Kuru's... book is original, scholarly, and wide-ranging, lifting the account of the relationship between religion and politics in Turkey out of the normal single-country context or the simpler comparison with other Muslim societies. Readers whose main interest in the Turkish or Muslim context may be inclined to skip the chapters on the United States and France, but by doing so they will miss an important part of the book which should be illuminating reading for anyone concerned with the role of religion in modern democracies." - William Hale, School of Oriental and African Studies, Middle East Journal
"I recommend this book highly to anyone interested in church-state issues, or in the comparative study of religion and politics. Students of American politics could learn from the book as well, since it puts contemporary US church-state debates in a broader context." - Clyde Wilcox, Georgetown University, Journal of Church and State
"Professor Kuru's book is, no doubt, a major contribution to the international literature on the subject, as well as being a much-needed scholarly contribution to the current debates in Turkey, which often presents a picture of a dialogue of the deaf." Ergun Özbudun, Bilkent University, Insight Turkey
"Relying on an extensive list of legal and political documents, interviews with political elites, and existing research sources.... Kuru has produced an impressive body of research. He has shown effectively that ideology can shape preferences and frame debates.... Secularism and State Policies toward Religion helps us understand both the origins and consequences of the variety of secular states and the policies that result." - Roger Finke, Penn State University, Contemporary Sociology
"Secularism and State Policies toward Religion is a very well-written, well-organized, well-argued and easy-to-read book on an important and difficult topic: it is a comparative in-depth analysis of three different regimes of secularism." - Menderes Çınar, Başkent University, New Perspectives on Turkey
"Kuru's book is a priceless contribution to the cutting-edge debate on state–religion interaction... [It] is the best comparative book that has been published recently on contested state attitudes and policies toward religion... The book succeeds in incorporating an extremely nuanced understanding of each of the three cases without losing terminological clarity, analytical consistency, and theoretical depth." - Berna Turam, Northeastern University, International Journal of Middle East Studies
http://www.cambridge.org/us/knowledge/isbn/item2427811/Secularism%20and%20State%20Policies%20toward%20Religion/?site_locale=en_US
Posted by Reflection Cafe at 4/18/2011