Being Modern in the Middle East:

Being Modern in the Middle East:Revolution, Nationalism, Colonialism, and the Arab Middle Class
. 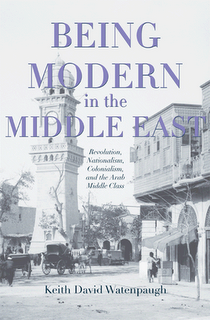 Keith David Watenpaugh
University of California, Davis
Princeton University Press, 2006
...
Based on archival, literary, visual, and oral historical evidence in several languages, including, Arabic, Ottoman and Modern Turkish, Armenian and French--and an eclectic body of theoretical literature--I argue in this book that in the crucible of the Young Turk Revolution of 1908, World War I, and the imposition of colonial rule, a discrete middle class emerged in the cities of the Eastern Mediterranean that was defined not just by the wealth, professions, possessions, or levels of education of its members, but also by the way they asserted their modernity. To claim modernity, they incorporated into their daily lives and politics a collection of manners, mores, and tastes, and a corpus of ideas about the individual, gender, rationality, and authority actively derived from what they believed to be the cultural, social, and ideological praxis of the contemporary metropolitan Western middle classes. By being modern, members of this class distinguished themselves from the region's ruling Sunni Muslim oligarchy and subaltern class of urban and rural poor and evidenced how they conceived of themselves as a separate element of their society. Moreover, excluded by customary practices and political theory from structures of power, this class contested its exclusion and asserted its right to equality, citizenship, and political participation in the idiom of modernity. By being modern, its members declared their intention to take a preeminent role in the production of knowledge and culture, not just for themselves, but for society at large. The dedication to these ideas, praxis, and politics marks that middle class as both a distinct component and an unprecedented innovation in the social and cultural history of the Middle East, as well as a vital subject in the question of modernity in the non-West.
I trace not just what it meant to be modern for this class, but how the class's commitment to being modern shaped its attempts to create civil society and mold urban politics, the multiple ways it employed nationalism, history writing, and violence to make sense of the post-World War I world, and its engagement with--or resistance to--European imperialism. Likewise, I explain how the emergence of this middle class began to alter the ideological, social, and cultural topography of the contemporary Middle East, especially as it bears on questions of secularism, citizenship, and liberalism. And as this new class, like its cognates in South Asia, Latin America, and East Asia, was, and continues to be, a salient feature of so-called globalization, or what should correctly be termed neomodernization, understanding its origins and its historical background is a crucial--and until now missing--dimension of postcolonial studies...
.
First chapter available, click here.
.
http://www.pupress.princeton.edu/titles/8210.html
.
Posted by Reflection Cafe at 5/10/2006